So, I’ve been really enjoying writing my latest story. It’s set in Stockport, Manchester, England, my hometown, and it is allowing me to use locations I have either been to, lived near or can easily get to. I’ve written stories based in Manchester City Centre before that I have enjoyed writing for the same reason but in my hometown is slightly better. Eventually, I’m going to write one a lot closer to home in the small village I grew up in but that’s for the future.

I have been doing some character profiles and story outlines but do not have an ending written out just yet. As I have been doing this I wondered how I could track my story. Usually, I would just read back over my notes or the story itself to make sure everything is as poly hole-free as possible. This has always been a bit messy really so I thought, how can I do this easily and efficiently? A long time passed thinking about this question until…

…a timeline punched me in the brain.

I’m not sure why I haven’t used one before with ANY of my previous stories over the years. It is working so well so far. I’ve laid out my timeline per character and date. Side by side, each column with actions to move the story along. This has allowed me to sync each character up and it seems like a breath of fresh air compared to my usual method. And long may it continue. But I feel I must say… 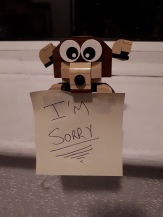 I’m sorry, Timelines. I’m sorry for not utilising you sooner. You are now, barring any goliath of a story planning idea to come my way, my future. I cannot see why I would not use a Timeline. It seems like it should have hit me sooner. I am sorry. Also, I hope the use of ‘The Kid’, my Lego monkey writing sidekick, will help my cause.

Phew. That feels better. Though, I feel I may have more grovelling to do. I’ve read many articles regarding timelines and obviously just let them rest in my subconscious. More fool me. Hold on. I’ll have to go back over all my previous stories and create one for each. But that will take some time. Maybe I should just use Timelines for any stories in future? But don’t all my stories deserve the same treatment?

Do you use or have you used Timelines when planning your stories? Do they help to ensure that each character is kept in line (story)? Or did you find them a hindrance and move onto something else?

Okay. I’m going back to the Timeline. And the apologies. Have a good week. Bye!

It has been a while. Again. Always seems to be the way recently. I think to myself ‘I’ll post more often’ and then stuff happens. This time it was moving house. I thought I’d have time but it has been all consuming, until recently, with setting accounts up for bills, unpacking boxes, building things, buying things to build, buying things to dig up other things, the list goes on. I’m almost completely settled now so I can get back to posting on my blog. This wonderful thing. My little soupcon of the internet.

So, since last time I have written another 1,000-word story. This one is opposed to the last one (see https://johnrsermon.com/2017/07/19/the-editing-beast-has-been-defeatedfor-now/) the last was a story based in a very dark place and this one is based in a very light place. The lightest place as it happens if it exists. I would say where it is but it would ruin the twist to the very dark story, which I will post on this blog in future.

I wanted to write an opposite story and one that occurs at the same time as the other. I have always enjoyed watching and writing chapters that have events happening at the same time but shown from different viewpoints. Anyway, I decided to write it quickly while the idea was fresh in my head.

Then I finished. Then I was living elsewhere. Then I moved out.

As I was setting everything up around the house move (bills, more bills, finding the local supermarket, and local pub etc.) And during this, a story woke up and began to run around my head. It’s been months since it had been for a run but I’m glad it managed it. And it is based in the town I’ve just moved too helped as well. The story is my take on the one man vigilante tale. I’ve watched and enjoyed plenty of them (John Wick, I’m looking and smiling at you) so I decided to write one myself. I wondered what one would be like with a person who isn’t an ex-Army, Special Forces, Gangster, Assassin, or any of them. A story about someone who just took up a number of different, readily available self-defence classes because he wanted too and then, suddenly, had to use them.

I got to work and I’ve written two chapters so far. Hopefully, I can keep it up and finish the story soon. It’s slowly building in my mind but I don’t have an ending yet.

Have you ever written anything without an ending?

It’s been a while since I have. Feels…schwifty.

So, I’ll get back to it. Hope you all have a good week.

Writers In The Storm

A Blog On Writing

The useless ramblings of a women who has too many feelings abouts movies, television shows and books.

Welcome to the Rabbit Hole for Geek Entertainment News, Clues, and Reviews!

The creative journey to becoming an author

Only We Can Change our Life, No one Else Do it For Us

Musings and books from a grunty overthinker